A quick recap of my highlights of 2011, in no particular order…

We blew the big bucks from savings, tore up the weeds that had been pretending to be a lawn and had a landscaper (EWG Dirt Cheap) come in and create something native, environmentally responsible, and easier to take care of. I’ll let the pictures speak for themselves.

This is another case where the pics could speak for themselves, but I want to add that Gary Taubes Why We Get Fat and What To Do About It and Good Calories, Bad Calories were a huge inspiration to me, since they talked loud science over the chattering of all the weight-loss pundits trying to sell me cardboard shakes and awkward spring-loaded pulley machines.

I feel better and I find it easier to control what I eat. More, I learned to skip the health article headlines and dig deeper into the results to figure out what the latest scientific study is really trying to tell me.

My wife, Natasha, celebrated her 20th anniversary of working for Disney this year. We’ve been to a few of the big anniversary parties over the years as guests of my parents, and they were lavish affairs with great food, but they always felt kind of big-company stodgy.

This year’s party seemed to be created entirely with us in mind. Apologies to the rest of you that had to attend our destiny. Held in Disney’s Hollywood Studios (nee Disney-MGM Studios), our “home” park over the years. The triumphant return of the blisteringly brilliant Adventurers Club cast (as well as the rest of the Pleasure Island cast). A massive fireworks show. Free drinks, colonel! It took me back to the heady, Eisnerized Disney Decade around the time we started.

Ultimately, Natasha had a wonderful time and I was happy to come along for the ride highlighting the best of our time there. I’m hoping for a similar experience when I turn 20 in mouse years next year.

I would have been excited about the reboot of the Star Wars ride at Disney regardless, but it came with so many bonus prizes! My buddy, Bree Starlighter, made it big as the intergalactic PR princess for the Star Tours company. 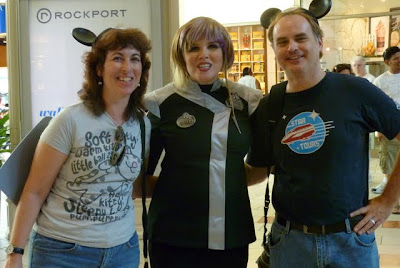 Star Wars Weekends, which I had been worrying would go the way of every Death Star, absolutely jumped to hyperspace this year.

Anthony Daniels performed a heartfelt one man/one droid show about the wonderful blessing it is to be See-Threepio. 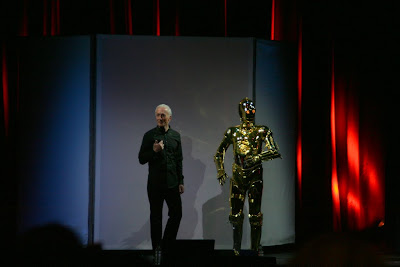 James Arnold Taylor (Obi-Wan from The Clone Wars) rocked his own stage show that managed not only to show off his own incredible talent but to inspire the audience to find its own.

All that, and did I mention the attraction is awesome, too?

(Side note: if you’re not watching The Clone Wars and you say you’re a Star Wars fan, you’re not…really…)

You know it’s going to be an absolutely incredible cruise when you get back from the lifeboat drill and there are spaces in the front row of the sail-away concert just waiting for you. 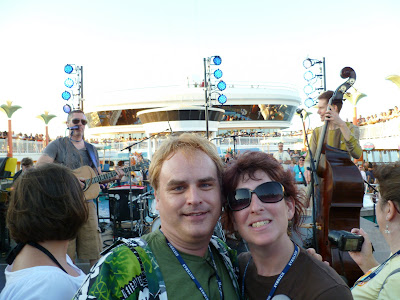 It only got better when I got stopped by Mike Evin, who recognized me from my Facebook page and wanted to thank me for all the nice posts about him. (Seriously, if you’re not listening to Mike’s music, you’re missing out. And definitely get the chance to see a live show – Mike is an awesome performer whose musical passion just reaches out and grabs the audience.) If only I would have remembered to get my picture taken with him! I guess I was a little bit star-struck.

Now, when do I sign up for the next one?

Back in August of 2010, after much personal deliberation and discussion with Natasha (which, for her part, was mostly, “Really, you need to do this”) I decided to go part-time at my “real” job and spend some time rediscovering bits and pieces of myself that had been missing for a while, subsumed by corporate culture and technology. I started work on a novel. I stopped working on said novel to struggle through a short story. I completed a draft of possibly the worst science fiction novel ever written during National Novel Writing Month. I rediscovered the joy of making things in my brain, and I keep learning every day about the things that hold me back and how to kick them to the curb. I am so lucky to be able to do this, and I am looking forward to my future.

Great wishes for all of you! Hope you have a wonderful 2012 and find all the things you’re looking for…